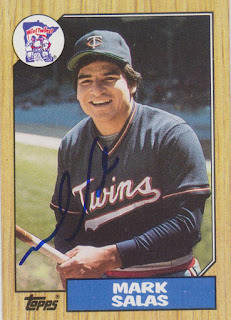 I cannot believe that it has been over a week since I have posted last. It has been some time since I have gone that long without a post. I was posting daily for a bit while I was looking for a job. While I am still on the job hunt, I found a job to keep me busy and bring in some kind of income; it's just not the job I want and it tends to take up more time than I like.

So, here is Mark Salas card number five. This one, like the last two of Mark, were signed at Kauffman Stadium by the visiting team's bullpen. Mark works for the White Sox and one might assume that he is the bullpen coach for the club. That is not the case. Mark is actually the bullpen catcher. Mark is 56 years-old and he is still able crouch down behind a plate. I am not even 40 yet and I could not do that job.