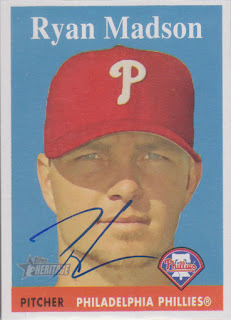 Here is one of my more recent signatures as I was able to get this card signed at a Royals game this past summer. Ryan was out on the field playing catch during pregame at the day game I attended and he was nice enough to come over and sign afterwards. He signed all three cards I had, though one got a little screwed up in the exchange.

Before this past season, Ryan last pitched in the Major Leagues in 2011. Because of that, I was a little skeptical when he got invited to Spring Training last year. I was then shocked that he made the team. But, he earned his way into the pen and he did a better job than anyone could have imagined him doing.

He ended up pitching 63.1 innings and posting a 1-2 record with 3 saves, a 2.13 ERA and 58 strikeouts. That ERA was the best of his career. At one point in early August, I thought the wheels were about to fall off when he gave up seven earned runs over two separate outings where he did not record an out. Though he had 1.2 innings of scoreless ball between those outings, his ERA rose from 1.69 to 2.64. I figured his arm was worn out after not pitching for four years. But he bounced back and allowed just two earned runs over the next twenty appearances. He was then a little shaky in the postseason before settling down in the World Series, where he pitched three scoreless innings while striking out five.

Overall, it was a great season for a player who's career was pretty much over two years ago. Plus, he was able to turn his success last season into a three year contract with the A's for $22 million. That is quite a turnaround.
at 8:54 AM