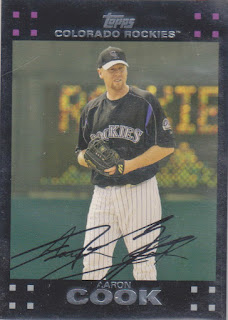 I got this card signed at a Royals game in 2008 while the Rockies were taking batting practice. I never would have thought that I was going to get Aaron's autograph that day as he was scheduled to start the game. But, there he was standing in the dugout during BP signing for people. When he got to me, I said "I thought you were starting today". He gave me a quizzical glance and told me that he was.

To this day, I am pretty sure that this is the only autograph that I have ever gotten from a starting pitcher during pregame on a day he pitches. Starters usually have a routine and that routine normally does not include signing autographs. Even at all of the Wichita Wingnuts games I have been to, I cannot remember ever getting an auto from a starter. It was very weird.

2008 was my first year back into autograph collecting after a long hiatus. All of the Topps cards from 2007 and 2008 had the pre-printed signature on them. But, back then, I was too naive to ever think about using a blue Sharpie to contradict more with the black pre-print. Because of that, I have a few cards from those sets where the real one and the fake one overlap. Some look better than others. This may just be the worst one I have, though, as they overlap so well that it is kind of hard to make out his actual signature. I, of course, got his '08 Topps signed that day, too, and it looks about the same.
at 10:29 AM