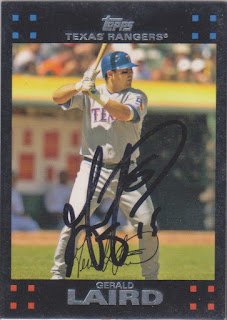 Here is a card that I was able to get signed at a Royals game in 2008 while Gerald and the Rangers were taking batting practice. He signed all three cards for me that day.

Gerald played for the Rangers for six seasons, which is twice as long as he played for any of the other four teams he played for. He played in 374 games for them, spending nearly all of that time at catcher. He hit .255 as a Ranger and tagged 25 home runs while collecting 134 RBI. His best season for them was his final season in Arlington in 2008. He played in just 95 games that year, but hit .276 with 6 home runs and 41 RBI. While he had a few more dingers and RBI the season before that, he also played in 25 more games and hit 50 points lower.

After that season, the Rangers traded Gerald to the Tigers for Guillermo Moscoso.
at 9:26 PM