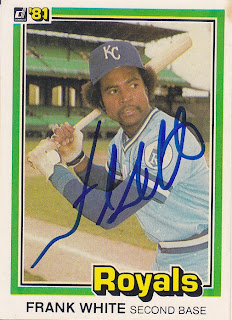 After years of trying, I was finally able to get this Frank White card signed last summer. After being let go as a broadcaster for the Royals, Frank got hired to be a coach for the independent Kansas City T-Bones. I was able to get this card signed at a game when the Bones were in Wichita last year.

I had gotten Frank's signature many times at signings, but this was the first time I had ever got him at a game. He was a pleasure to talk to and I was very surprised at that. At the signings, he is very business-like and tries to keep the lines moving as fast as possible. But at the game, he was real down to Earth and I talked to him a couple of times before the game started. I took my girlfriend's son to the game, too, and Frank threw him a ball after one of the innings was up. It was really special.

Here is Frank coaching first at that game. 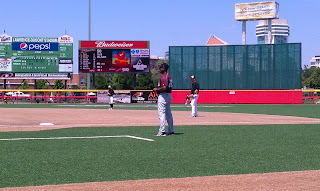 Here is the bobblehead that the T-Bones gave out later that season. 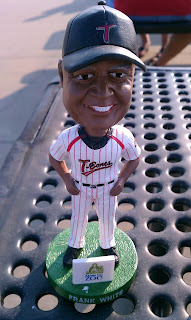 I actually got this card signed before, but it was accidentally signed by John Mizerock. You can see that card at the end of this post because I have no clue where that card is now.