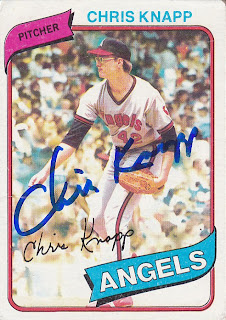 Here is the final card from the Topps Million Card Giveaway that I was able to get signed through the mail. I sent this card to Chris on February 8 and I had it back eight days later.

I think I did alright with the MCG. I didn't unlock anything cool or really old, but I was able to add a few autographs from people I otherwise wouldn't have wrote to. The only thing I would have done differently is that I would have looked for Chris' '81 Donruss card to send along with this one. I had never heard of Chris until I unlocked this card, so I just assumed that I did not have his '81 Donruss. A few months after getting this card back, I came across my Chris Knapp '81 Donruss card. Now I am wondering if I have an '81 Donruss of Woddie Fryman that I missed out on.

Speaking of '81 Donruss, I will start posting cards from that set tomorrow. But, I will not be posting as many as I would like as it has been a slow summer on the road to 100 signed cards from the set.
at 10:08 AM