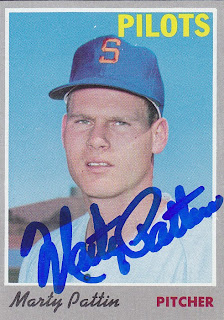 Here is the third Marty Pattin card that I have posted on here. This signature was obtained at Royals Fanfest last winter. I got this card signed on my second trip through his line. On my first trip, he did not say a word to me. But, when I came through with this card, Marty's eyes lit up and he said "oh, to be that young again and know what I know now".

Marty's claim to fame may be that he was the fabled Duck in Whitey Herzog's Hungo, Mingo, the Bird, and the Duck bullpen quartet. Al Hrabosky, the Mad Hungarian, was Hungo, Steve Mingori was Mingo, and Doug Bird was the Bird. Marty was the Duck because of the great Donald Duck impersonation that he does. If you get lucky, you can sometimes hear him do that impersonation during signings.

Marty was an All Star with the Brewers in 1971, a season where he finished 14-14 with a 3.13 ERA. That was his lone All Star selection and it was probably his best season as a starter.