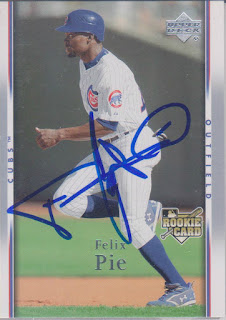 Here is a card of former Cubs prospect, Felix Pie. I got this card, and two others, signed at an Orioles game in 2009 while Felix was playing for them.

I met up with Ryan, from The Great Orioles Autograph Project, at that game and he showed me the ropes of 'graphing at Camden Yards. We ended up by the Orioles dugout just before game time and that is when Felix entered the dugout from the clubhouse. I asked him to sign and he looked like he really didn't want to. But, he came over anyway and signed my three cards and not much more after that.

Ryan, by the way, just got back from Spring Training down in Florida and has a ton of autographs to show off. Check them out if you get a chance.

Felix's time with the Cubs was relatively short, but he sure got a ton of cards made of him during that time. He spent just parts of two seasons in Chicago and could never really get it going. Over 130 games, Felix hit just .223 with 3 home runs and 30 RBI and had more strikeouts than hits. After the 2008 season, the Cubs shipped him to Baltimore for Garrett Olson and a minor leaguer.
at 11:01 AM

Thanks for the link Zach! It's good to see you kept your blog going strong while I was away. Keep up the great writing, and I love seeing the autographs!