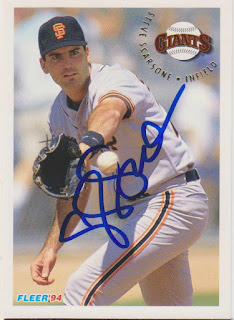 Here is the first of two cards that I got signed by Steve Scarsone when I was in Omaha in 2015. Steve was the manager for the visiting Nashville Sounds and he stopped to sign for me on the way out to the field.

Omaha's Werner Park has a cool set-up where both the home and visiting clubhouses are in left field. To get to the field, both teams use a ramp that leads down under the concourse to the field. Because of that, it is one of the best spots in baseball to do some 'graphing because you can get players from both teams in one area. It can get a little hectic, though, when there are a bunch of guys heading to the field at once, so you have got to be real organized there. But, other than that, it is a great set-up that is rivaled only by the Round Rock Express, who have a similar set-up.

As for Steve, he is no longer with the Sounds. But, he is still in the A's organization. He is currently listed as their coordinator of baserunning/defense.