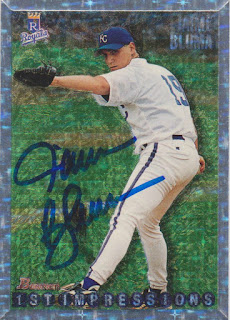 Here is a super foily card of Jamie Bluma that I got signed at a Royals game last year. It was a Sunday game, so I was able to hit up the alumni signing at the Royals Hall of Fame. This card is foiled out to the max and I wasn't too sure how good it would come out. But, it turned out much better than I anticipated. Nonetheless, I am glad that they don't make cards like this anymore.

Jaime was once a highly touted Royals prospect. As a result, he got a few cards made of him before he ever appeared in the Major Leagues. Unfortunately, he only appeared in 17 games at that level, but he did do a respectable job. He came out of the bullpen in all 17 contests and was 0-0 with 5 saves and a 3.60 ERA in 20 innings of work. He ended up missing all of the following season due to injury and pitched three more seasons in the minors before calling it a career.

Even though Jaime only threw 20 Major League innings, it is still cool that he attends a bunch of Royals alumni events. Now I just need to find some more cards of him. All five that I had have been signed.
at 12:45 PM