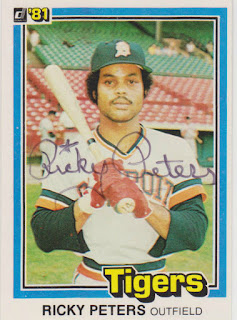 It has been three years since I last posted a card from the '81 Donruss set. Over that time, I have got about thirty more cards signed from that set. So, be prepared to be seeing the '81D for the next few months.

The first one is of Ricky Peters. I got this one signed through the mail last year. I sent it to Ricky in November and I got it back three weeks later.

Ricky played in the Major Leagues for five seasons with the Tigers and A's. He hit .277 in the show with 2 home runs and 80 RBI. His first home run was a grand slam that he hit for the Tigers in 1980. Too bad they were down by seven when he hit it.

I really like Ricky's signature. The star is unique.

I originally started the Donruss Tracker to track them as I got closer to my goal of 100 cards signed from the set. Since I met and exceeded my goal, I figured that there is no need to track them out of 100 (ie no more 176/100).