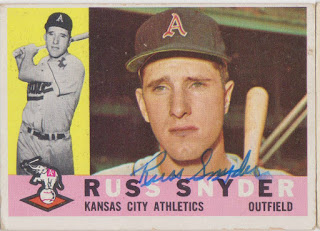 Here is the first of two cards that I got signed through the mail by Russ Snyder in 2014. Come to think of it, I sent two cards to the guy in the previous post, too. Anyway, I sent this card to Russ at the end of January that year and I had it back about a week later.

These 1960 Topps cards that I am posting are going to lean heavily on the Kansas City A's. In fact, if it wasn't for an extra card a former player sent me, the cards from this set would all feature guys that played in Missouri. Being a Kansas guy and a Royals fan, I am always intrigued by the first Major League franchise in Kansas City. Because of that, I have quite a few Kansas City A's cards signed.

Russ played for the A's for just two seasons. He did well there, hitting .283 with 7 home runs and 47 RBI. After the '60 season, he and Whitey Herzog were shipped to Baltimore for a quartet of players.
at 10:31 PM