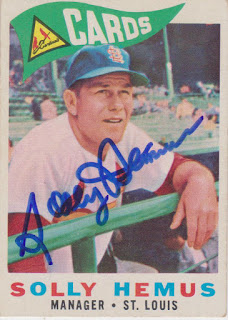 Here is the next card from the '60 Topps set, a managers card of Solly Hemus. I sent this card to Solly on the last day of 2012 and I had it back about two months later.

Solly had an eleven year playing career with the Cardinals and Philiies. He started out with the Cards before joining Philly for the second half of his career. Then, he rejoined the Cardinals in 1959 as their player/manager. That gig ran through June before he quit playing and was just a manager.

Solly was at the helm of the Cardinals for less than three seasons. The club finished the '59 season in seventh place with a 71-83 record. They turned it around a bit the next year with a 86-68 record, but it was only good enough for a third place finish. Then, in '61, the team was 33-41 when Solly got the ax. Johnny Keane took over and he had them in the World Series three years later.

I love the layout of the mangers cards from this set. Though it is odd to have the cards so different from the rest of the cards in the set, they still came out looking good. I kind of wish that Topps had made an entire set based off of this design.
at 10:27 PM