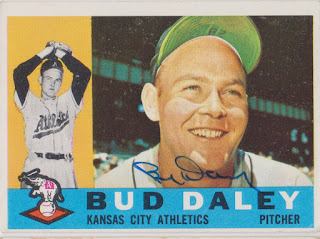 Here is the first of about a half dozen 1960 Topps. This one features the the former Indian, Athletic, and Yankee, Bud Daley. I sent this card to Bud in 2014 and I had it back nine days later.

Bud played in the Bigs for ten years, never playing for a team for more than three and a half seasons. He both started and relieved throughout his career, getting the bulk of his starts during the middle of his career with Kansas City. Over the 248 games that he pitched in, he had a 60-64 record with 10 saves and a 4.03 ERA. His best season was with the A's in 1959 when he went 16-13 with a save, a 3.16 ERA, and 125 strikeouts.

Bud made two All Star teams as an A and pitched in two World Series with the Yankees. He racked up three strikeouts in 1.2 All Star innings, ringing up the likes of Ernie Banks, Vada Pinson, and Orlando Cepeda. In the Fall Classics, he pitched eight scoreless innings and was the winning pitcher in game five of the '61 series.
at 7:41 PM