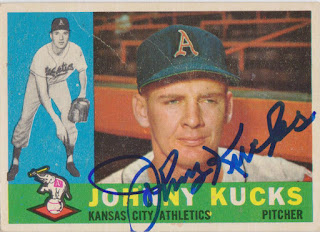 The next card for the 1960 Topps set is another Kansas City Athletic, Johnny Kucks. I sent this card to him at the end of 2012 and I had it back about nine days later.

Johnny pitched for the Yankees and A's from 1955-1960. Most of that time was spent on some very good Yankee teams. They were so good, in fact, that Johnny had the privilege of pitching in four straight World Series.

In the four World Series Johnny pitched in, he appeared in 8 games and logged 19 innings. All of his appearances were in relief except for one. That one start was in game seven of the 1956 Fall Classic at Ebbets Field. Johnny pitched a complete game shutout while limiting the Dodgers to just three hits, all of which were singles.

Sadly, this is the second straight card that I have posted of a player that has passed away since I wrote to him.
at 10:52 AM