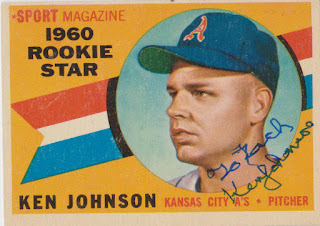 Next up is the former Athletic, Red, Colt .45/Astro, Brave, Cub, and Expo, Ken Johnson. I sent this lone card to Ken at the end of 2012 and I had it back about two weeks later.

Unlike the past few guys I have posted on here, Ken had a fairly long career. He played in the Majors for parts of thirteen seasons and, out of all of those teams, he saw the most time with the Braves from 1965 to 1969. Ken started and relieved throughout his career, but did have more starts than relief appearances. He finished his time in the big leagues with a 91-106 record with 9 saves and a 3.46 ERA. He reached double digit wins five times in his career with a season high of 16 in 1965.

Ken's claim to fame is pitching a no-hitter for the Colts in 1964. But, his no-hitter was unlike any other no-hitter in the history of the game. Ken is the only pitcher to throw a nine inning Major League no-hitter by himself and lose the game.

It was against that Reds in Houston early that season. The game went into the ninth tied at zero. Ken made an error that allowed Pete Rose to reach second base. Pete made it to third on a groundout before scoring on an error by third baseman Nellie Fox. Since then, four other teams have thrown no-hitters in losing bids. Three were thrown by visiting teams, so the pitchers only logged eight innings. The fourth was thrown by a home team, but two pitchers combined to no-hit the winning club.