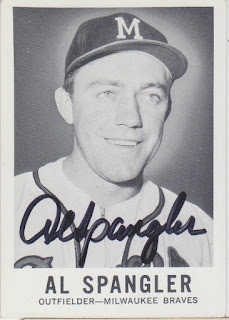 I am starting off my newer cards from the '60s with an oddball from the 1960 Leaf set. I know absolutely nothing about this set. But I saw one on COMC one day and I knew that I had to get one to get signed. So I picked up this Al Spangler card and mailed it to him in early 2013 and he had this beauty back to me in about three weeks.

Al played for the Braves, Colt .45s/Astros, Angels, and Cubs during his thirteen year Major League career. Most of that time, he was the team's fourth outfielder. But, he did get a lot of starts while playing in Houston. For his career, Al was a .262 hitter with 21 home runs and 175 RBI.

According to baseballcardpedia, this Leaf set contains 144 cards and they were distributed in packs. Each pack came with a marble instead of chewing gum.
at 12:44 PM