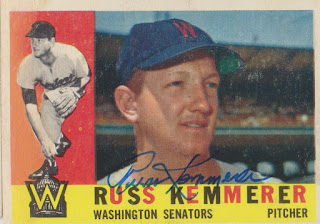 Here is the second card of Russ Kemmerer that I got signed through the mail in 2013. I posted the first one about a month ago and it can be seen here.

The two cards were the ones I got back from Russ, but were not the one I sent to him. I actually sent him a '64 Topps cards that showed him with the Colt .45s. While it would have been cool to add a new Colts card to the collection, I cannot complain about the two for one trade I got.

Russ pitched in the Major Leagues for nine seasons with four different clubs- the Red Sox, Senators, White Sox, and Colt .45s. He was mainly used as a reliever during his career, except for when he played for Washington. He primarily started for them and did not do too well. He never had a double digit win season, but he did reach double digits in losses three times, including a career-high of 17 in 1959.