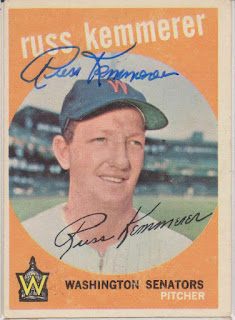 This is the final card from the '50s that I have to show on here and it is of Russ Kemmerer. I originally mailed out a card to Russ in either late 2012 or early 2013 and it came back "return to sender". I had no idea why it came back as the address matched the address on SCN. So, I sat on the card for a while until I saw more successes coming from that address. I then mailed the card back to the same address I had used earlier and I got some signed cards back a week later.

The only problem was that I did not get the card back that I sent Russ. I sent him his '64 Topps card just because he was playing for the Colt .45s on it and you can never have enough signed Colt .45 cards. But instead of getting that card back, I got this one, his '60 Topps, and two different signed postcards. While it would have been nice to add a second .45 card to my collection, I think I still came out alright.

Here are the two postcards he included. 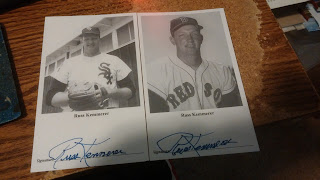