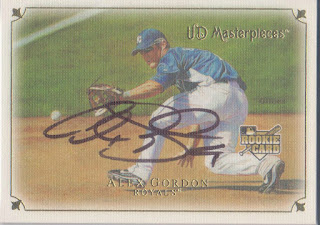 We go from the worst set Upper Deck might have made in 2007 into what is arguably their best set from that year. Here is a glimpse at their 2007 Masterpieces set. If you have never seen cards from this set, they are pretty unique. Not only are the cards on unglossed card stock similar to what was used for the Goudey set. But, they also have a pock-marked texture on the front of the cards. The reason or purpose of that texture is unknown to me, but it is still a good-looking set. Luckily, the funny texture does not ruin the signature.

This is the fourth card from 2007 that I have shown of Alex Gordon. The first one can be seen here, the second one here, and the third one here. That first card was from the '07 Bowman set and it was posted nearly a year ago. I cannot believe that it has taken me a whole year to post my 2007 cards.

Those first three cards I posted of Alex were some of the first autographs that I ever got from him. They were all signed in 2008 or 2009. This one here might be the most recent card that he has signed for me. I got this one signed at Royals Fanfest in 2013. Since that time, it has gotten a little harder to get cards signed by Royals players, especially the big name ones.

So far this season, Alex, like most of the Royals, is off to a slow start. Through 27 games, he is hitting a paltry .211 with just 2 dingers and 5 RBI. Hopefully the team will be able to get their bats going soon or it may be a long season.
at 11:35 PM