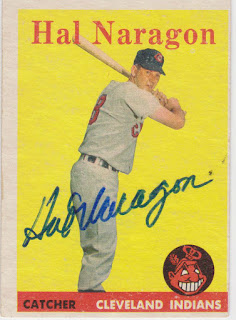 Here is a card of Hal Naragon that was also signed through the mail in 2013. I sent this card to him in February and I had it back about five weeks later.

Hal played in the Majors for ten seasons with the Indians and Senators/Twins. Like the previous three cards I posted, that all happened to be catchers, he too was a back-up throughout his career. The one season he saw some significant playing time was 1959, the year he got traded to Washington. That season, he played in 14 games for Cleveland before getting into 71 games as a Senator. The most games he played in before or after that was 57, a feat that he accomplished three times.

For his career, Hal was a .266 hitter that had 6 home runs and 87 RBI. None of his seasons really stand out as being a career year, but he did have career-highs in homers and average in 1956 when he had 3 jacks and 18 RBI. That was one season after hitting .323.

Hal did have the privilege of playing in one World Series. It was with the Indians in 1954 and he got into one game as a defensive replacement that did not get to hit. Unfortunately, the Tribe was swept by the Giants in the Series.

When Hal was dealt to the Senators, he was traded for Ed Fitz Gerald. I posted a card of Ed earlier this week.
at 9:56 AM