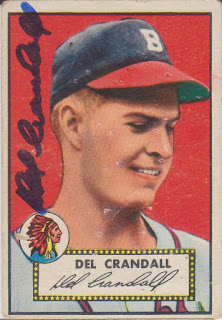 If I am going to show off some cards from the 1950s, what better way is there to start than by showing off a '52 Topps card? This is only the second card from the set that I have got signed and, just like the first one, I got it signed through the mail. TTM successes are going to be the theme of this blog for some time to come. The first '52 Topps card I got signed was by Eddie Joost and that card can be seen here.

The last time I was posting some vintage TTM successes on here, I posted a Colt 45s card and declared that I had a signed card of every team to ever play from 1952 on up. And, not only did I have every team, I also had a card from every city that the teams played in since 1952. Then it dawned on me. I had forgotten about the Boston Braves. I had a Milwaukee Braves card signed, but not Boston. I guess I just assumed they were in Milwaukee by 1952. Once I had figured out I was missing a team, I quickly picked up this card from COMC for a few bucks. This card would be in decent shape if it wasn't for the staple holes running down the middle of the card. Apparently this card's original owner was not a Del Crandall fan.

I sent this card to Del in November of 2012 and I had it back three weeks later. Del charges five dollars to sign through the mail and it was well worth it to get this card signed.

Del had a long and productive Major League career. He played for sixteen seasons with the Braves, Giants, Pirates, and Indians, spending the majority of the time with the Braves. As a Brave, he played in two World Series and was an eight-time All Star and four-time Gold Glove catcher. Del was a .254 career hitter with 179 home runs. He had three 20 home runs seasons and caught three no-hitters

I am kind of surprised that Topps even made this card of Del in 1952. He missed all of the '51 season serving in the military. The card notes Del's service on the back and even adds that he "does not expect to be discharged in time to play this year", which proved to be true.
at 9:34 PM