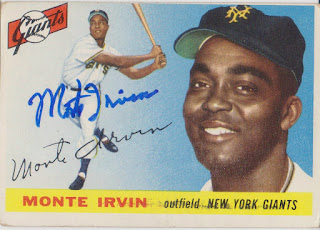 Next up is Hall of Famer, Monte Irvin. I think I originally bought this card for All Star Fanfest in 2012 when Monte and Ernie Banks were on the initial list of players to attend. Both of them ended up not making it to the event, but luckily, Monte was a great TTM signer. He charged ten dollars to sign a card and that seemed like a bargain to me. So, I sent this card to him at the end of November that year and I had it back two weeks later.

Sadly, Monte passed away earlier this year. He was about a month shy of his 97th birthday. I thought about posting this card that day, but there were so many tributes to him on the card blogs that I did not even want to try to compete with all of them. So here it is now, right where it belongs on this blog.

Monte's career in the Major Leagues spanned just eight seasons as some of the better years of his life were spent in the Negro Leagues. Though he only made one All Star team, he had two monster seasons with the Giants. The first one came in 1951 when he hit .312 with 24 home runs and 121 RBI. The second one came two years later when he hit .329 with 21 dingers and 97 RBI.