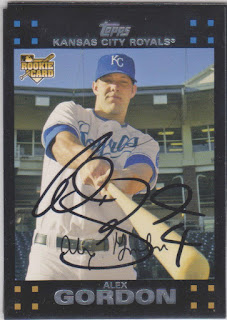 Back-to-back superstars? That does not happen very often on this blog.

Here is a card of World Series Champion, and current free agent, Alex Gordon. This is just the second card of Alex that I have posted one here. The first one was posted back in May when I was just starting out my 2007 cards. I obviously have not made it very far since then.

Alex hit just .222 in the World Series, but he hit a clutch home run in game one. With the Royals down 4-3 with one out in the bottom of the ninth, Alex hit a solo shot to center off of Mets closer Juerys Familia to tie the game and send it to extra innings. The game ended up going fourteen frames before the Royals could muster the walk-off run. Alex would only get three more hits in the Series, but that game one homer really helped to swing the momentum to the Royals favor.

Alex missed out on a fifth straight Gold Glove this year when he missed about two months of the season to a groin strain. I really did not expect him to win the award because of the time missed, but I was glad to see that he was a finalist. Then, when I saw that Yeonis Cespedes won it, I was a little pissed considering that Cespedes spent the last two months in the National League. Plus, Cespedes' lack-luster play led to the first inside the park home run in the World Series since 1929. That does not seem that an American League Gold Glove player to me.

Like I said, Alex is currently a free agent. I have not heard very much talk about him to this point. I've seen some rumblings about the Cubs and Orioles and that has been it. Hopefully, he will end up staying in Kansas City.

I got this card signed by the Royals parking lot in 2008. Mike Aviles pulled up while Alex was signing and Alex quipped "hey, there's Mike Aviles!". Alex has always seemed like a straight-forward, no nonsense type of guy. All I could think after he said that was "is Alex Gordon being funny?". It kind of caught me off guard.
at 10:27 AM