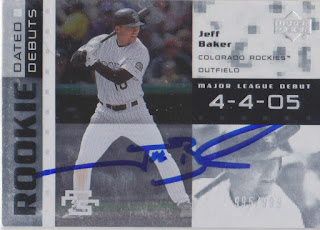 Here is a card that I got signed by Jeff Baker at a Royals game in 2013. Jeff was playing with the Rangers at the time and I was able to get three cards signed by him during batting practice. That happened to be one of the rare Saturday games that I have been able to make it to and, like most games I attend with my family, I was running a little behind schedule. Because of that, I was not able to get my primo spot by the visitor's dugout. I was close, but a row back from where I needed to be. Luckily, the guy in front of me was really helpful and he was passing my cards up to the guys signing to help me out.

This was one of the hard to pull inserts out of the 2007 Future Stars set. Like I said in the last post, I bought two blasters of these and I think I got two inserts total. The funny thing is that the inserts are the only cards that have anything to do with future stars. When I bought these cards, I was basically expecting an Upper Deck version of Topps '52. That was not the case at all.

Regardless, I was pleased with how this card came out looking signed. It is severely lacking color, so the blue signature helps out with that. It is hard to see in the scan, but this card is numbered 995/999.
at 12:15 PM