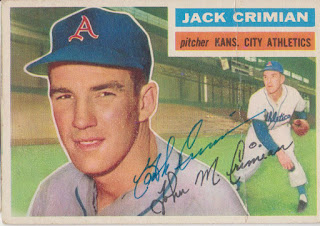 Next up is this card that I got signed by Jack Crimian through the mail. I sent this card to Jack at the end of 2012 and I had it back about a week later.

Jack pitched professionally for fifteen seasons, but only appeared in Major League games during four seasons. He spent parts of two seasons with the Cardinals, a full year with the A's, and then a partial year with the Tigers. He appeared in 74 games over those four seasons and 56 of them came with the A's in 1956. He was almost exclusively used as a reliever during his time in the big leagues and he went 5-9 with 4 saves and a 6.36 ERA.

His only decent season was his year with the A's. The A's were horrible that year, finishing 52-102, and I guess that is why they kept Jack up all season. He made 7 starts that season and finished with a 4-8 record with 3 saves and a 5.51 ERA.

I tend to be drawn to Kansas City A's cards to get signed through the mail. I probably have at least a dozen of them coming up over the next couple of months of posts.

In 1953, Jack was traded by the Cardinals to the Reds for Alex Grammas, the person of interest in my previous post.
at 2:19 PM