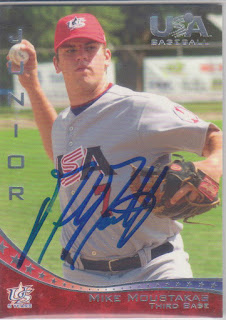 Finally, 359 days after posting my first card from 2007, I am ready to post the last one. By my quick count, I posted 143 signed cards from sets made in 2007. That averages out to one post every two and a half days. That is a good posting rate for me these days. That rate was better than it would have been thanks to the birth of my son and some daily posting while on paternity leave.

I got this card signed in Wilmington, Delaware while Mike was playing for the Blue Rocks in 2009. It was a crappy day for baseball as it had been raining off and on for a couple of days. While I was there 'graphing before the game, the weather could not decide what it wanted to do. It was almost always at least misting with occasional bouts of rain thrown in. I got Mike to sign for me while it was just misting and the cards came out OK. There is one light spot on the first "M" of his signature where the Sharpie hit a tiny drop of water, but it is barely noticeable.

Mike signed two cards for me that day. The first one can be seen here.

Since I am finished up with my 2007 cards, it is time to rewind and show off older cards that I got signed over the past couple of years. I am really looking forward to that as I have about twenty cards from the '50s to post. At the rate I post, it will probably be sometime next year by the time I get around to posting my 2008 cards.