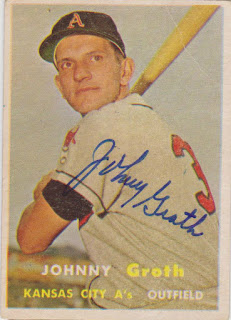 Here is the next vintage card pick-up from the bi-monthly card show in Wichita. I picked up this card for about a buck and sent it to Johnny the first chance I had. Johnny charges five dollars to sign through the mail and I have no problem sending an old-timer a few bucks to help them out. It is not like those guys made the type of money today's players do. Johnny had this card back to me in less than two weeks.

Johnny played in the Majors for parts of fifteen seasons with the Tigers, Browns, White Sox, Senators, and A's. He was originally signed as a twenty year old by the Tigers and made his Major League debut with them that same season. He would go on to spend about eleven years in Detroit, seven to start his career and three and a half to finish it.

Johnny's career started in 1946, so there are some nice early cards of him available such as his 1950 Bowman and 1951 Topps Blue Back. I am not sure if the nearly ninety year old gentleman still signs through the mail or not since I got this one signed three years ago. But, if he does, there are some cool cards of him out there that would be fun to get signed. I am happy with a signed Kansas City A's card, but a '51 Topps would be a nice addition to my collection.
at 10:56 PM