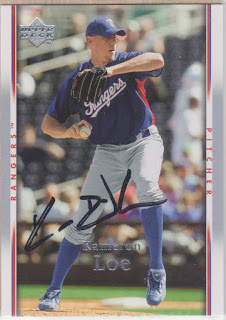 Here is a card that I got signed at an Oklahoma City Redhawks game in 2008. Somehow, I was lucky to snag a couple of signatures from Kameron after the game as he was making his way from the bullpen to the dugout.

Kameron pitched for the Rangers for parts of five seasons as a starter and reliever. He was average, at best, for them, going 19-23 with a save and a 4.77 ERA. His best season with them came in 2005, his first full season in the Majors. That year, he got into 48 games, starting 8 of them. He posted a 9-6 record with a save and a 3.42 ERA.

After the 2008 season, Kameron went to Japan for part of a year and pitched for the Hawks. In 5 starts there, he went 0-4 with a 8.67 ERA. He came back stateside for 2010 and has played for the Brewers, Mariners, Cubs, and Braves since then. Last season, he pitched in the Atlantic League.