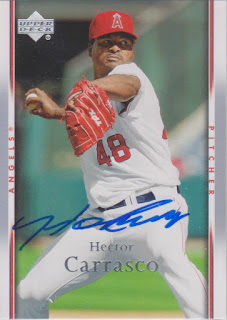 Here is the third and final card of Hector Carrasco that I got signed at the 2010 American Association All Star Game in Wichita. If you do not remember the first two, do not feel bad. They were both posted in 2010. You can see the first card I posted here and the second one here. Those first two cards were mid-90s cards and were posted within a week of each other. When I posted the first one, I said it would probably be about a year before I got around to posting this '07 Upper Deck card. Here it is, five and a half years later.

This is probably the last card of Hector to come out as his last season in the Majors was in 2007. Despite that, he kept playing the game through the 2012 season. The 2010 Am-Ass All Star split 2011 between the Atlantic League, the American Association, and the Mexican League before heading to Mexico full time in 2012. After that season, Hector called it quits after pitching professionally for TWENTY-FOUR seasons.

Over that time, Hector played with the Reds, Royals, Twins, Red Sox, Orioles, Nationals, and Angels as well as a season in Japan. Amazingly, over his career, despite pitching 832.1 innings in the Major Leagues and 517.2 in the minors, Hector never pitched at the AA level. He spent six seasons in rookie or A ball before being bumped up to the Majors.
at 10:23 PM