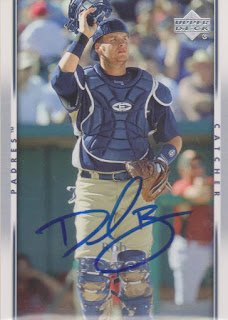 Unlike yesterday's card of a Padre, which was acquired in-person, this one is the more common variety around here. Yes, this is another installment of Padrographs. If you are not familiar with that term, it is a card that comes from Rod. Rod runs Padrographs and every now and then he will send some of his extras. And by some, I mean that he has easily given to me more than 200 signed Padre cards. He is an awesome dude and one that I had the pleasure of meeting up with last summer.

As for Rob Bowen, he played in the Major Leagues for parts of five seasons with the Twins, Padres, Cubs, and A's. He appeared in only 216 games and over half of those came with the Padres in 2006 and '07. He got into 94 games with them in '06 and had exactly 94 at-bats. He only started eight games that season, so he mainly joined the game as a pinch hitter or as a defensive substitution. That season, he hit .245 with 3 home runs and 13 RBI. One of those home runs was a pinch hit home run and another was a walk off.