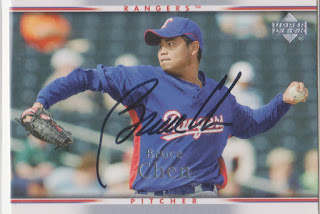 After only a month and a half, I have finally finished my signed 2007 Upper Deck cards with this post. Why a set needs almost a thousands cards, I have no idea. But, because there are so many cards in this set, I have this beauty to show off. I am sure you are wondering what is so special about this card. Well, it is the only card that I know of that features Bruce Chen as a Ranger.

To date, I have posted cards of Bruce as a Brave, Phillie, Met, Astro, and Oriole. I know that he has a card as a Red and Expo, but I was never able to acquire one of those. But, I did have a few of these cards to get signed. In fact, I have an extra one if anybody needs one. Just let me know.

I got this card signed at a Royals game in 2010. I went to that game with a friend and I 'graphed the visiting team. I sent him over to get anything that he could from the Royals and he got two out of three cards signed by Bruce. Bruce was still signing by the time I made my way over there and I got him to sign this one for me.

Bruce pitched for the Rangers for all of five games and they were all relief appearances. In those games, he had no record and a 7.20 ERA over ten innings of work.
at 11:21 PM