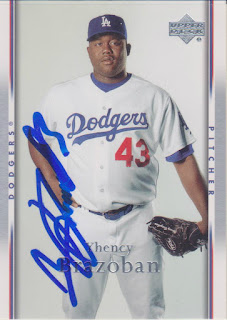 Here is a card that I got signed at a Wingnuts game in 2014. Yhency was with the Grand Prairie AirHogs at the time. This is the second card of him that I have posted on here and the first one can be seen here.

When I posted that first card, I talked about Yhency's time with the Dodgers from 2004-08. In Spring Training in 2009, he got released by the Dodgers and ended up not pitching at all that summer. He came back in 2010 and saw time in the International League and the Mexican League. He then made even more stops in 2011 by playing in Japan, the Pacific Coast League, and the Majors with the Diamondbacks. He got into six games with them and posted no record with an ERA of 6.00 in six innings of work while walking four and striking out eight. That was the last time he would ever pitch in the Majors.

After that, it was back to Mexico in 2012 before not pitching in 2013. He came back to some independent leagues in 2014, but called it quits after 6.2 innings with two different clubs.