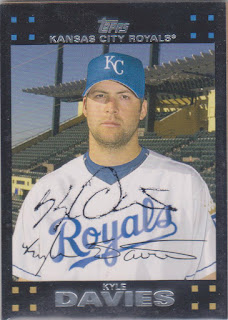 It has taken me since the end of September, but, with this card, I have finally made it through the 2007 Topps base set. I still have a couple of signed inserts from the set to post, but this is the last black border card without chrome on it that will be posted for some time. I can't believe it took me three and a half months to post thirty-one cards. Thank goodness I had this baby and went on FMLA or it would have taken me another month and a half to get there.

Anyway, here is a card of Kyle Davies that I got signed by the Royals parking lot in 2008. And, it is obviously unprepped. This is the third card of Davies that I have posted on here and it is the first one that shows him as a Royal. It is a photoshopped version of him as a Royal since the photo is a Braves Spring Training shot, but a Royal nonetheless. I posted the last card of him back in 2012 when it appeared that he was out of baseball. Those were the days when, if you could not make it with the Royals, you probably were not good enough to be a Major Leaguer. Luckily for us Royals fans, the times have certainly changed.

Kyle did come back to baseball, though, in 2013. He pitched in the minors for the Twins, Indians, and Yankees. Then, last April, he did something he hadn't done in four years. He pitched in a Major League game. He pitched 2.1 innings of scoreless baseball to wrap up a 14-4 whooping over the Red Sox at Yankee Stadium. He allowed just three hits while striking out two and walking none. That was the only appearance he made in the big leagues for the season, but it was a good one.

It appears that Kyle is heading for Japan this season to pitch for Yakult. I hope it works out for him over there.
at 11:17 AM