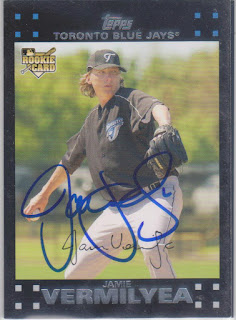 Here is the first of three cards that I got signed by former Blue Jay, Jamie Vermilyea. Jamie is the pitching coach for the Winnipeg Goldeyes and I got the cards signed at a Wingnuts game last season.

Out of the three cards that Jamie signed for me, this is the only one that I had in my collection to start with. The other two cards were purchased from COMC. Had I realized that Jamie only pitched in two Major League games, I may not have bought the other two cards. Yeah right, all three look great in my collection. It is just hard to come up with three posts for one guy with such little Major League playing time.

Like I said, Jamie pitched in two games with the Blue Jays in 2007. In those two relief outings, he logged six innings of work without allowing any runs. He gave up just five hits without walking anyone and striking out two. Even though it was a limited workload, those are some decent numbers to hang your hat on.

For as much crap as I gave the Update and Highlights set, this is how great the signatures can come out looking if the card is properly prepped. To see how bad they can look when unprepped, see my previous post or just wait for the next two.
at 12:33 PM