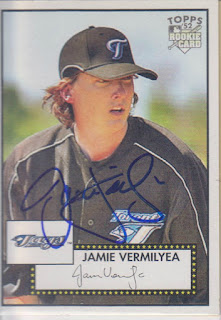 Here is the second card of Jamie Vermilyea that I got signed at a Wingnuts game this past season. Jamie is the pitching coach for the Winnipeg Goldeyes. The first card I posted of him can be seen here.

I really like the idea of the Topps '52 concept. It is an entire set of guys that made their debut during the previous season and, in many cases, is the only rookie card that player will ever get. Add in the fact that the set is printed on non-glossy Heritage card stock and you have definitely built a winner, especially for the autograph collectors.

The one problem with this set is that they put out the same set two years in a row. The 2006 and 2007 Topps '52 sets are completely identical except for the tiny copyright date on the back. I've recently been getting my collection a little better organized and, when it comes to these two sets, I just throw them all together. When I get a little more time, I will go back and strain my eyes to divide them up by year.

So, while I really like the idea of rookie sets printed on Heritage card stock, Topps overdid it by putting out the same set in consecutive years. Thank goodness they did not do it again in 2008. While I like the idea of a rookie set, something has to be done to differentiate them from year to year.
at 8:38 AM

I agree with you that the double dip on the 1952 design was a bad idea, but I wish Topps would revisit the theme. I'd love a revival of the short-lived MLB debut set they did for a year or two in the early 1990s.

That is a great idea. A rookie set, in general, is an awesome idea. They just have to mix the design up in some way so that it is distinguishable from year to year.