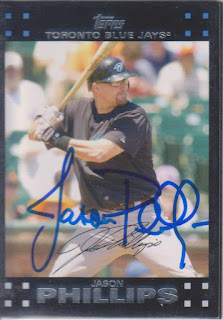 This is the fourth and final card of Jason Phillips that I have to post. I got this card signed at a Royals game in 2012 while Jason was the bullpen catcher for the Mariners. He was heading back to the dugout after working a bullpen session with Jason Vargas. I just yelled out "Jason!" hoping to get either's attention. Phillips was the one that acknowledged and he came over and sign my two cards for me. The other one he signed was a Dodgers card that I posted last year. The first two cards were Mets cards that he signed for me the year before. Here is one of those cards.

Jason spent his final two Major League seasons with Toronto. He only saw limited action and spent some time playing AAA in the Jays organization as well. He played in 80 games with the Blue Jays and he hit .219 with 1 home run and 18 RBI.

With the new manager in Seattle, it appears that Jason's tenure as their bullpen catcher may be over. He is currently not listed on the M's website as a member of the coaching staff. Mike Hampton, though, is listed as their new bullpen coach. I did not know that.
at 2:56 PM