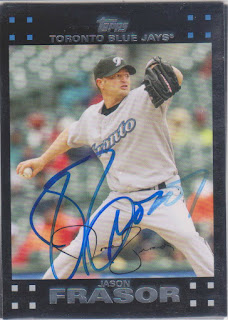 I know I gave this Update and Highlights sets a lot of grief over the last two posts, but the cards really do come out looking fine if they are prepped. I have about ten more cards from this set to show off and only three of them look like crap. The rest look as good, or better, than this one. The only reason why this one does not look so hot is because it was misting the day that Jason signed for me. It was at a Royals game in 2011 while he was with the White Sox. The signature started out fine, but he then hit a bit of moisture towards the end of the sig and the Sharpie looks like it started to die. That is what can happen when you try to 'graph in the rain.

Jason pitched for the Blue Jays for parts of nine seasons. He pitched entirely out of the bullpen and, over that time, he was 25-29 with 36 saves and a 3.73 ERA. He had a strikeout per inning in four of those nine seasons and recorded a career high 17 saves in his 2004 rookie season. 2009 might have been his best season in Toronto when he went 7-3 with 11 saves and a 2.50 ERA.