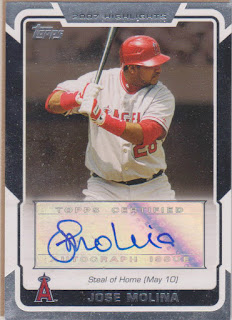 Here is a card of Jose Molina that I bought from COMC for $2.49. Every time I make a purchase from the site, I always try to throw in an autograph or two just to obtain an autograph. This is one of those. I bought it for no other reason than because of that and that it was cheap.

Jose, the middle brother in the Molina trio, played in the Major Leagues for fifteen seasons with the Cubs, Angels, Yankees, Blue Jays, and Rays. He was mainly a back-up catcher throughout his career, playing in 100+ games only twice. He even spent the first part of his career backing up his older brother, Bengie.

For his career, Jose hit .233 with 39 home runs and 223 RBI. Some of his better seasons came later in his career when he started more games withe the Blue Jays and Rays. In 2011, with Toronto, he hit a career high .281. The following season, with Tampa Bay, he had career highs in home runs(8) and RBI(32).

This is the second Molina brother I have shown on here. I posted a card of Bengie last February. Now, if I could just get my hands on an autograph from Yadier, I would be set.

The three Molina brothers are the only three brothers in MLB history to all win World Series rings. All of them have won two except for Bengie.

Another fun Jose Molina fact is that he hit the last home run at old Yankee Stadium.
at 9:28 AM

That's funny - I have Yadier (on a spring training program) and Bengie (on a baseball card) but no Jose autograph in my collection.

Looks like you got the best of the three