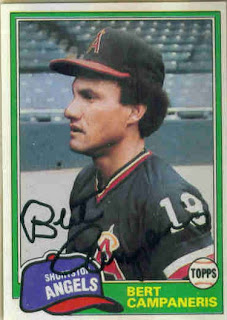 #410 Bert Campaneris
Earlier this year, I started buying old packs every once in awhile on ebay. Most of them were from 1981-1986. They were usually cards from before I collected or from my first years of collecting when those cards aren't in very good shape. This is one of the cards I pulled from a 1981 Topps rack pack. I got it signed at the Willie Wilson Classic in May. It's the only Campaneris card I had at the time, besides the '81 Donruss with a nice layer of gum on the front. But about a month ago, I found two more Campaneris cards that I had this whole time ('82 Fleer and '93 Ted Williams Collection). Maybe he'll be back next year.
Earlier I posted how Amos Otis had gained a few pounds since his playing days. That is not the case for Campaneris. He looked exactly the same in May of 2008 as he does on this 1981 card.
at 2:23 PM