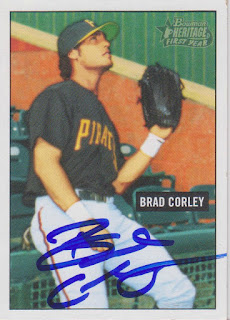 Two posts ago, I showed off the Gio Gonzalez auto that I got in a trade with a random reader for a pair of '05 Bowman Heritage Cesar Carrillo cards. When we made the deal, he gave me a list of cards that he had available for trade. I picked the Gio card and told him to throw in an '05 Bowman Heritage card that he had dupes of. This is that throw-in card.

Brad played in the minors for five seasons, never making it above AA. The second round pick out of Mississippi State reached the AA level in just his third year of pro ball, but could never get any higher. Despite hitting .262 in his first full season there, the Bucs cut ties with him in 2009 and he finished the season playing for the Rockies AA team. That was Brad's last year in baseball.

In my last post, I poked fun at the pose that Drew Butera was in. This one isn't much better, but it looks much cooler thanks to the Heritage effect.