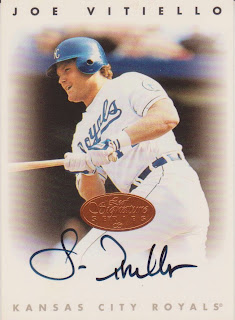 This card set me back all of ninety-five cents. Like the Sal Fasano and Ricky Bottalico cards I also posted from this set, I got this one just because Joe is a former Royal. The only difference, though, is that I never saw Joe play.

Joe was drafted by the Royals in the first round of the 1991 draft out of Alabama. He signed quickly and was assigned to Eugene in the Northwest League. He tore up that circuit over the 19 games he played there (.328 avg, 6 HR, and 21 RBI). He was then bumped up to AA where he struggled. He hit just .219 there over 36 games.

The next season was spent entirely in the Florida State League before spending all of 1993 in the Southern Association (AA). In 1994, he was moved up to AAA Omaha and that became Joe's home for the next six seasons. Over that time, he was called up to Kansas City yearly from 1995-99. But, he could never stick with the Big League club.

After his time with the Royals, Joe played five more seasons, mostly at AAA. He did spend one season in Japan and did have a couple of call-ups with San Diego and Montreal. He did real well with the Expos, too, hitting .342 over 76 at-bats. But, it was back to the minors the next season which ended up being his last.