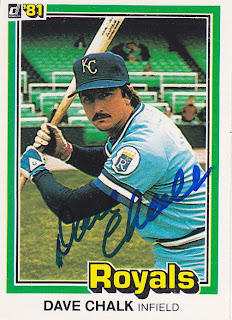 Next up is the former Angel, Ranger, Athletic, and Royal, Dave Chalk. I sent this card to Dave in November and I had it back about two weeks later.

Dave was a first round pick by the Angels in 1972 and he made his Major League debut the following season. In 1974 and '75, he was an All Star for the Angels despite hitting just .252 and .273, respectively. I know that those are season ending numbers and the game is played in July, but there isn't anything spectacular-looking about any of his numbers during those seasons (unless you count leading the league in errors). I thought that maybe he might have been the lone representative for the Halos since each team needs at least one, but Frank Robinson also made it in '74 and Nolan Ryan was selected in '75.

Dave finished his career with the Royals in 1981 as a back-up infielder. He has a .252 career average and he hit 15 home runs. And, he made two All Star teams.