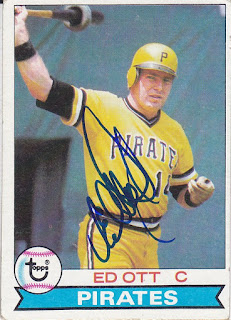 Last season, both the American Association and the Can-Am League fielded an odd number of teams. Rather than have a team sitting out for a three or four game stretch, the two leagues decided to play interleague ball against each other. As a result of that, I was able to get Ed Ott's autograph at a Wichita Wingnut game as Ed is the pitching coach of the New Jersey Jackals. The Jackals were the lone Can-Am team to travel to Wichita last year and it appears that they will be the only one this year, as well.

Ed signed all three cards for me before the game I went to. He was in good spirits despite being less mobile than he was in his playing days (it was fairly obvious that his time behind the plate took its toll on his legs). I knew the Jackals had a small road trip through the American Association, so I was curious if they brought a bus or if they ponied up the money for a plane ride. Ed said that they flew into Kansas as there was no way his body would have survived the bus drive from New Jersey.

Ed is still the pitching coach of the Jackals and I am sure that I will try to make it to one of their games in Wichita again this season. If anyone needs an autograph from Ed, let me know and I will probably be able to get one for you.

For such a short name, there is a lot going on with Ed's signature.
at 8:04 PM

Ask him about almost strangling Rob Dibble when he was coaching the Astros.

Cool. I know most of the Newark Bears players took a bus out to the American Association road trips last year, but a few flew on their own.