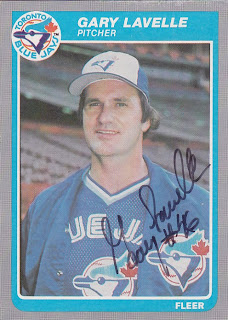 Here is another Gary Lavelle card that I got signed through the mail. I originally decided to write to Gary when I unlocked his '78 Topps card on the Topps Million Card Giveaway site. Since I do not own Gary's '81 Donruss card, all I planned to send him was the '78. But, for Christmas last year, my best friend gave me a sports card stocking that he found at a hardware store. In it was random packs of sports cards, a minor league team set, and a complete set of 1985 Fleer Update that was missing four cards. And in that set was this card. Since the set was missing four cards, it wasn't really complete and I had no trouble breaking into it and mailing this card out.

How many Blue Jay logos can you find on this card?
at 9:52 AM

That is a classic card. I wouldn't have blamed Fleer if it left the logo off of this one. It's overkill!