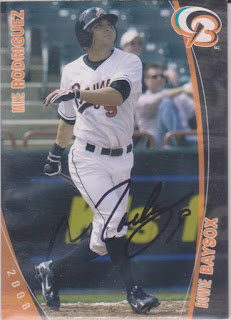 Here is another Oriole minor leaguer that was given to me by Ryan in 2013. This one features Mike Rodriguez.

Mike was originally drafted by the Astros in the second round of the 2001 draft. He played in the Astros system for seven seasons and reached AAA with them, spending two seasons at that level. Then, he joined the O's in 2008 and was demoted to AA. In 2009, he played in the Atlantic League before retiring at the end of the season.

With two Grandstand cards back-to-back, it is good to see they used different borders with the two sets. Many times, with so many minor league teams and so few card companies making team sets, borders get repeated among the various teams. I definitely like the border on this one better than the one on yesterday's card.

Grandstand (and Choice as well) don't pick the borders/designs. They create templates to choose from and it's up to each team to pick which design they want their team sets to look like. They don't even provide the images. They're nothing more than template designers.

Holy cow, I had no idea. Do they print the cards at least?

The team provides the images and whatever stats and bio information they wish to provide. Grandstand and Choice then make the cards and ship them back to the teams, ready to sell.