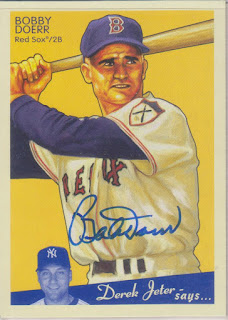 I know I said that I was going to change things up and not do individual posts of guys that have been posted on here before. But, I have three cards signed by Hall of Famers in this Goudey set and it does not feel right to just lump them together with the other guys. So, for now, two of the three Hall of Famers will get their own post. In the end, I am sure all three will get their own.

Here is the card of Bobby Doerr that I got signed through the mail in 2008. I sent two cards his way towards the end of the year and I had them both back and signed in about eight days. That turn around time still impresses me.

Bobby might have been one of the greatest signers to ever live and I have no clue how he was able to pull it off like he did into his late nineties. I can't imagine the amount of fanmail that he had to receive on a daily basis. That man had to have set aside time every day to keep churning out the autographs like he did. He was truly an asset to the autograph community and is dearly missed.

I posted the other Doerr card way back in 2010 and you can see that post here. That card is from a 2003 set. It is pretty sad that I have only gotten up to my 2008 cards since posting that card nearly nine years ago. If you don't want to go back to see that post, here is the card. 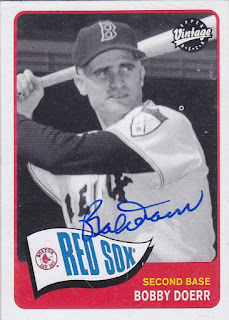 Four years ago, I posted another Bobby Doerr through the mail autograph. For Christmas in 2013, my then fiance ponied-up some dough and bought me a graded 1939 Playball Bobby Doerr. Being the autograph nerd that I am, I busted that beauty out and sent it to get signed. While his signature wasn't nearly as neat as it was in 2008, it still came out looking great. I am forever thankful for my wife for buying me that card. She is pretty freaking awesome. 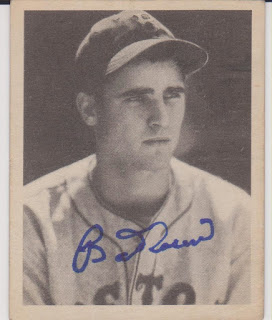 All three are beautiful, but the 1939 Playball definitely stands out. Very, very cool.

I'm probably the only autograph collector that never got Bobby Doerr. However, I did try, albeit a little too late. I sent him a card and about 2 weeks later it was returned unsigned with a note saying that Mr. Doerr was too ill to sign. Sadly, the day that letter arrived was the same day that he had passed. When I ripped that envelope open, I thought for sure I was getting the very last autograph that Mr. Doerr had ever signed.