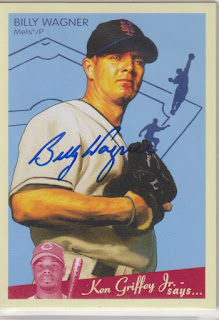 Here is a card that I pulled out of a pack in 2008. And, of course, the pack was a retail pack from Wal-Mart. Ninety percent of the packs I get are retail and all of my best pack pulled autos came out of retail packs.

Billy pitched in the Majors for sixteen seasons with the Astros, Phillies, Mets, Red Sox, and Braves. Over that time, he had a 47-40 record with 422 saves and a 2.31 ERA. Billy made seven All Star teams during his career, was in the top five of saves in the National League four times, and made the postseason seven times. His 422 saves rank him sixth all-time.

Billy was fairly consistent his whole career, minus the postseason where he had a 10.03 ERA in 11.2 innings of work. But, the one season that stands out to me is his final season in 2010 with the Braves. Billy turned thirty-nine during his one season in Atlanta and had a phenomenal year. That season, he was 7-2 with 37 saves and a 1.43 ERA. Better yet, he struck out 104 batters in just 69.1 innings. It was his first 100 strikeout season since 2003. Way to go out on top, Billy!

Billy has been eligible for the Hall of Fame for four years now. He stayed in the 10-11% voting range for the first three years before jumping up to 16.7% this year. It was a nice spike, but he has a long ways to go to reach the magical 75% plateau.
at 4:00 AM