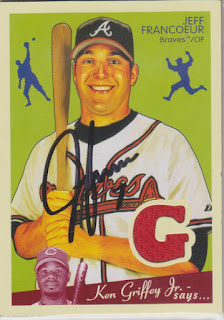 Here is a card that I got signed by Jeff Francoeur at Royals Fanfest in 2011. Back then, it seemed like I would get at least one jersey card a year signed at the event. That is not the case anymore. Nowadays, it is impossible to get in more than one line per session and the bigger name guys (ie, the ones with jersey cards) only sign once a day. With six lines and not knowing who you are going to be getting, I don't even waste my time buying these for Fanfest anymore. But, I am glad that I bought this one the 2011 event.

Frenchy was an absolute stud when he came up. I had the privilege of watching him play multiple times in his first full season in the Majors since I was stationed in Georgia at the time and he was a joy to watch. But then 2008 came and his numbers dropped off dramatically. While he was never the same run driving-in-machine that he was in 2006 and '07, but he still stuck around in the league through the 2016 season.

One of my best memories at a game involves Frenchy. On May 13, 2006, I was at Turner Field to see the Braves host the Nationals. The Braves entered the ninth inning down 5-3. Brian McCann lead off the bottom of the inning with a solo home run to bring the game to within one. A handful of singles later, Jeff came up with the bases loaded. Instead of just knotting up the game or driving in two on a single, Jeff hit a walk off grand slam to send the Braves home a 8-5 winner. That was so awesome! I mentioned the walk off to him when he signed this card and he told me it was still his best memory as a ballplayer.
at 1:55 AM

Have you seen Jon Bois' video about Francoeur? It's glorious.

That was awesome! Thanks for sharing