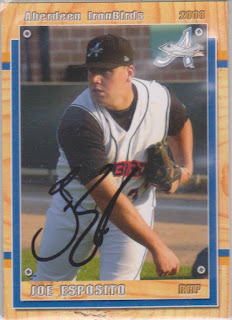 Here is a card that was given to me by Ryan, from The Great Oriole Autograph Project, in 2013. Ryan had sent me a little care package at the time and in it was some random signed minor league cards that he had acquired over the years. This is one of those cards and one more will be coming up in the next post.

Joe pitched in the minor leagues from 2007-2012. He spent the first three seasons in the O's system before joining the Phillies organization for two years and then finishing in the Atlantic League. Minus his Atlantic League time and 14 games in AA, he spent his time in some sort of A-ball.

For his career, Joe was 26-23 with 12 saves and a 3.74 ERA. His best stint in the minors was with the Delmarva Shorebirds in 2009. That season, he got into 18 games in relief and was 3-0 with 2 saves and a 2.43 ERA. He also recorded 52 strikeouts in just 33.1 innings. He was also about two and a half years older than the average player in the South Atlantic League that season and the O's cut ties with him when the season was over.
at 3:20 AM